What next for our seven loan rangers? 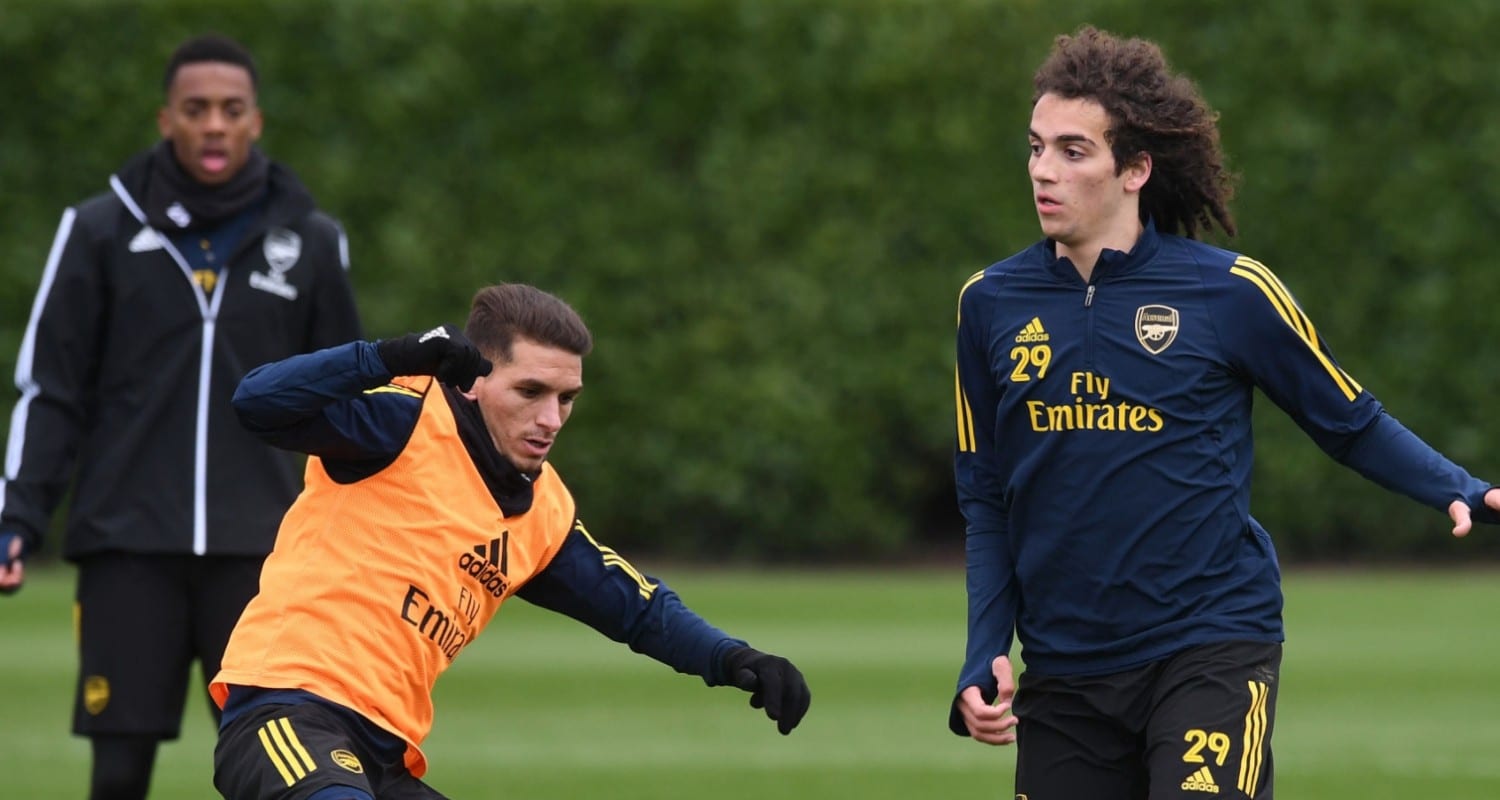 Morning all, I trust you’re holding up okay wherever you are in the world.

There’s not a cloud in the sky above Brixton this morning and the moon – half of it, anyway – is staring back at me. All I keep thinking is it’s a bloody shame we’ve not stuck a pub on it in the last 52 years. Oh well. One to bear in mind before the next pandemic…

It was interesting listening to Mikel Arteta talk about his plans for the summer transfer window on Wednesday morning. It sounds like he knows what he wants to do but, as was the case last year, the elephant in the room is whether or not we’ll have European football to help swell the coffers.

He said: “We are planning what’s going to happen in the summer. It will depend on where we finish, how we finish. I think what we had to in December is unprecedented for a club of this stature. To do the amount of transactions that we had to make it tells you as well where we are. I think it was very much needed and you want to improve, you want to do that. It’s where you have things in the house and you believe that you can improve on it. Externally acquiring players to go to the next level. Everything is planned and let’s see what the market can bring and what the last few months can bring to the club.”

Moving on costly players six months earlier than expected certainly stands us in good stead. As does the return of some semblance of normality (including fans at the Emirates) by the start of next season.

The thing is, when you look at the current squad, it’s very easy to put question marks over the future of 11 out of 25 of them.

We’ve got three players on loan (Mat Ryan, Dani Ceballos and Martin Odegaard), a backup keeper from Dijon who doesn’t cut the mustard (Alex Runarsson), three guys not playing much (Calum Chambers, Reiss Nelson and Eddie Nketiah), three sellable assets edging towards the end of their contracts (Hector Bellerin, Mo Elneny, Alex Lacazette) and David Luiz who is a free agent in July.

That’s extraordinary and hints at lots more upheaval to come at the end of the season. We’ve also got seven players on loan.

I thought we’d focus on them after the boss made clear their progress is being monitored closely.

“We’re having meetings very often to assess what they’re doing and obviously we’re getting all the information and watching their games because I want to keep a very close eye on what they’re doing. We were talking yesterday for example with Ben Knapper, who is our loan manager, who is in charge of monitoring everything we are doing, and we are in contact with the players. Let’s see. It’s good news that they are playing and it’s good news that they have the possibility to have a lot of minutes because that’s going to give us a much better perception of where they are and how we can use them.”

In some cases “how we can use them” probably means “how much we can flog them for” but I guess time will tell. So without further ado…

When Arteta took over, I had high hopes that Lucas’ Arsenal career, which started so brightly would be rehabilitated. The broken bone sustained at Portsmouth last January was a big setback and both parties seemed very open to a permanent parting of ways in the summer. With little liquidity in the pandemic-hit market and the player under contract for a couple more years, we settled on a high-profile loan deal that should, in theory, have seen his market value stay steady if not increase. Lucas has played just 611 minutes for Diego Simeone across 21 appearances. He’s completed 90 minutes just three times; in his first league appearances and twice against minnows in the Copa Del Rey. There was even talk of Atletico sending him back to Arsenal and a host of Italian clubs came sniffing in January. I don’t think he’ll be staying at the Wanda Metropolitano past this summer and even though I harbour hopes of him being next season’s Mo Elneny (a steady squad player), I suspect we’ll look to sell because we know there are suitors.

While his positional discipline and…well…general discipline leaves much to be admired. There’s absolutely no doubt in my mind that Guendouzi is a very good footballer. At the same time, it’s pretty clear that Mikel Arteta has no patience for his pubescent behaviour and he’s probably very relieved to have him well away from the other players. He’d made 82 appearances for the Gunners before he was sent into exile – a crazy amount for his age – and was on the cusp of a debut for Didier Deschamps’ World Cup winners. Even with a reputation as a prized-dickhead he should have been a winning lotto ticket for us, but now I reckon we’d settle for £15-20 million and Matteo not burning down the training ground on his way out. Sadly, I think he’s done at Arsenal.

Having played a part in bringing him to Arsenal, it was telling that Sven ‘Diamond Eye’ Mislintat recruited the Greek for Stuttgart after he’d impressed on loan at Nurnberg. By all accounts, the 6ft 3-inch centre-back has done quite well in the Bundesliga. Groin and knee problems meant he missed a lot of the first half of the season but he’s got 13 appearances to his name, almost all as starts. Aside from the injuries, I think Dinos’ problem is that he’s a complete stranger to Arteta. He went on loan two weeks after the Spaniard became our head coach and he’s been gone ever since. Chuck in the fact we’ve got loads of centre-backs and it’s hard to see him turning things around in London. Young and on the up, we have the potential to make some money and I reckon a quick deal will be done.

He took a massive wage cut to go and help his former club in a battle they were always destined to lose. They handed him the captain’s armband and he then mounted a player revolt which got head coach Christian Gross sacked. You have to respect him for taking on all that hassle when he could have sat on his arse at Arsenal. The fact he took Mustafi along with him for the ride, really underlines his maverick status. Out of contract in the summer, he’ll be a free agent in 117 days. Good luck to him.

We all know that West Brom and Sam Allardyce weren’t top of Ainsley’s list when he decided to look elsewhere for game time. Unlike other clubs, they guaranteed him a role in midfield and he’s already completed four games in a row there. Let’s say he completes another 10 games in the middle of the park for the Baggies, is he going to be happy returning to utility status at Arsenal? I ask that question because it’s already clear he’s not considered a midfielder by Arteta. He got one opportunity in a central role against Austria Vienna and let’s face it, you or I probably could have held our own that night. He even got the England nod as a roving wing-back. Ainsley’s facing a big decision about the next stage of his career. I think we’d be open to keeping him – we did it last year when an offer was on the table from Wolves –  but he himself needs to feel that he can fulfil his potential at the Emirates. At this point, I’m not sure he does.

I really like Joe and I want him to stay at Arsenal. In a functioning attack, I can see him scoring goals because he’s great at getting himself into the box when others don’t take those risks. In that respect, he’s always reminded me of Aaron Ramsey. From the outside, Joe’s issue seems to be self-confidence. He clearly needs to play regular football and to build momentum in his career. Any man who lives off Europa League football alone will grow up to be a husk of a footballer. The move to Newcastle, at a time when he’d fallen behind Emile Smith Rowe at Arsenal, was very positive even despite their myriad problems. I don’t think his spell at St James’ Park is the beginning of the end for him at the Emirates and I reckon Arteta will welcome him back into the fold in the summer.

It’s pretty clear that his Arsenal experience to date has hurt his pride and he’s not been shy saying as much in recent interviews with the French media. You can’t really blame him for having the hump, he was badly mismanaged by the club who kicked up a fuss about recalling him from Saint-Etienne (at the expense of a cup final appearance) only to dump him in the reserves a couple of months later. Saliba doesn’t think Arteta gave him a fair shot in the summer and he might be right. A 19-year-old is rarely the answer to your centre-back issues and for better or worse, the boss stuck with a decision made off the back of a very short pre-season. Having failed to loan him out in September, it’s great that he’s now doing well in France. So far, Saliba has completed 90 minutes in 11 of Nice’s last 12 Ligue 1 games and the only reason he didn’t play the other is that the match had been rearranged from earlier in the season and he wasn’t eligible. Rivals clubs will be alert to his form and circumstances so when he returns we need to sit him down and outline a clear progression plan for him. The club says he’s a big part of the future, they have to prove that when he returns to London.

So what’s that…another five our of seven that I’m predicting could leave? A total of 16 out of 32 that I can envisage elsewhere. I better not make any plans for the summer, looks like we’ll be busy on Arseblog News.

The post What next for our seven loan rangers? appeared first on Arseblog … an Arsenal blog.

The Article What next for our seven loan rangers? First Appeared ON
: https://arsenalweb.co.uk

The Article What next for our seven loan rangers? First Appeared ON
: https://gqcentral.co.uk