Revelations From a Hypnotherapist – This will amaze you! Since 1998, Susan Worth has worked as a professional healer, specializing in advanced hypnotherapy, counseling, advanced IEM, Oldpain2go, Reiki 2, and hypnobirthing. Her passion is for the inspiration, growth, and success of people of all ages.

Susan has had some notable career-related experiences over the years…

A Condition Caused by Stress

A lady once called me to see if I would be able to work with her husband years ago when I hadn’t been in practice as a hypnotherapist for very long (although I had been a counselor/psychotherapist for many years). She claimed he was currently off work due to stress. Of course, I could collaborate with him; after all, this is what I do. The woman asked if my room is accessible because her husband had a disability; we talked about the access, but there wasn’t really anything else spoken about.

The couple showed up as expected; she went with him to the door and then left after he was sitting in the “chair” I said that I had a quick conversation with his wife and that he was experiencing stress. The man continued by claiming that he had never felt as dejected as he did right now and that this feeling had persisted ever since his surgery three months prior. When I questioned him about the procedure, he said that he had a benign tumor on his brain that needed to be removed. He went on to say that ever since the tumor was removed, he had lost all use of his legs and had been unable to walk. He said that despite numerous physical and psychiatric evaluations and examinations, the cause of his non-functioning legs had not been determined.

During our discussion of his operation and the people he had contacted, Thomas indicated that, prior to the operation, the Doctor had discussed the advantages and disadvantages of the procedure but that he had no choice but to have it done.

I told the client I would take him through the surgery to see what the ‘initiations’ were during the hypnosis phase of the session. He underwent two sessions with me, and at the conclusion of the third and last session, he “walked” out of my consulting room feeling just as energized and self-assured as he did before his operation.

I had just set off the “trigger. ” If we need to go deeper than we initially believe, there is a remote chance that your limbs could be impacted, although this is negligible, his pre-op advisor had warned. Sadly, the man just heard that “your limbs may be affected.”

The man returned to work and began walking to work after a month.

A woman with weight worries came to visit me. She told me that she had a gastric band operation five years prior, and as a result of the procedure, she lost considerable weight and gained her life back.

After some time, she found she was gaining weight. She went to see her consultant, who advised her that because of her overeating, she had “stretched” her tummy and should continue to lose weight by exercising. When she did, she gained an additional 5 stone.

When we “revisited” her procedure during her first hypnosis session with me, she surprised herself afterward by losing all the extra weight she had gained.

I currently work with a bariatric clinic, where the operating doctor suggests that clients who are “struggling” with restoring weight contact me. Together, we effectively work to restore the initial “condition” in which they successfully lost their goal weight.

Why a Mantra Can Be Useful 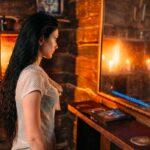 I enjoy giving folks a “mantra” to use, especially if they are self-conscious. I took the idea to identify myself with one from a source I read many years ago, and some of his work continues to influence mine now.

As the end of my yoga class drew near, I was in the studio apartment of my local gym when I heard a person who had attended one of my counseling sessions in the gym room shouting his “mantra” out loud for the rest of the gym to hear. I overheard a big group of them all joining him in chanting the same “mantra”: “Every day in every way, I’m getting better and better.”

Worth Therapy, Susan’s practice, is situated in a charming rural area of England’s North West, with views of Rivington and the West Pennine Moors.

Susan has been a therapist since 1998, qualified in advanced hypnotherapy, counselling, advanced Integral Eye Movement, Oldpain2go, Reiki 2, and HypnoBirthing.  Her passion is for the motivation, development, and success of people of all ages.

Susan finds offering her unique combination of “Solution Focused Therapy” to be exceptionally good at getting to the root cause of the problem, which helps people to notice an immense change in their lives.

She has extensive experience with ridding people of anxieties, phobias, depression, addictions, and other psychological complaints.  Each treatment is customised to their individual needs; most people notice improvements from the first session.

Being a member of The British Association of Counselling and Psychotherapy, she is bound by its Ethical Framework for good practice.

Please don’t hesitate to contact Susan with your enquiry.

The post Revelations From a Hypnotherapist – This will amaze you! appeared first on https://richcitations.org

The post Revelations From a Hypnotherapist – This will amaze you! appeared first on https://gqcentral.co.uk